The goal of this project was to do research into the health sector, using design thinking, to find opportunities where GN electronics can introduce products into the Ghanaian market.

The research was done in three phases. The first phase was aimed at identifying 6 opportunity areas where GN electronics could enter the health market with an electronic product. Three of the six areas would be selected after which the second phase of the research would identify 6 possible products, two from each area, that GN Electronics could produce. One of the six would be selected for further research and prototyping.

A stakeholder map was developed to identify the key stakeholders in the health space. General practitioners and patients (the users in the health sector) were identified as the most active stakeholders and were, therefore, the focus of the research. This decision was arrived at because most health problems experienced by patients are sent to general practitioners before referrals are made to specialists if necessary. 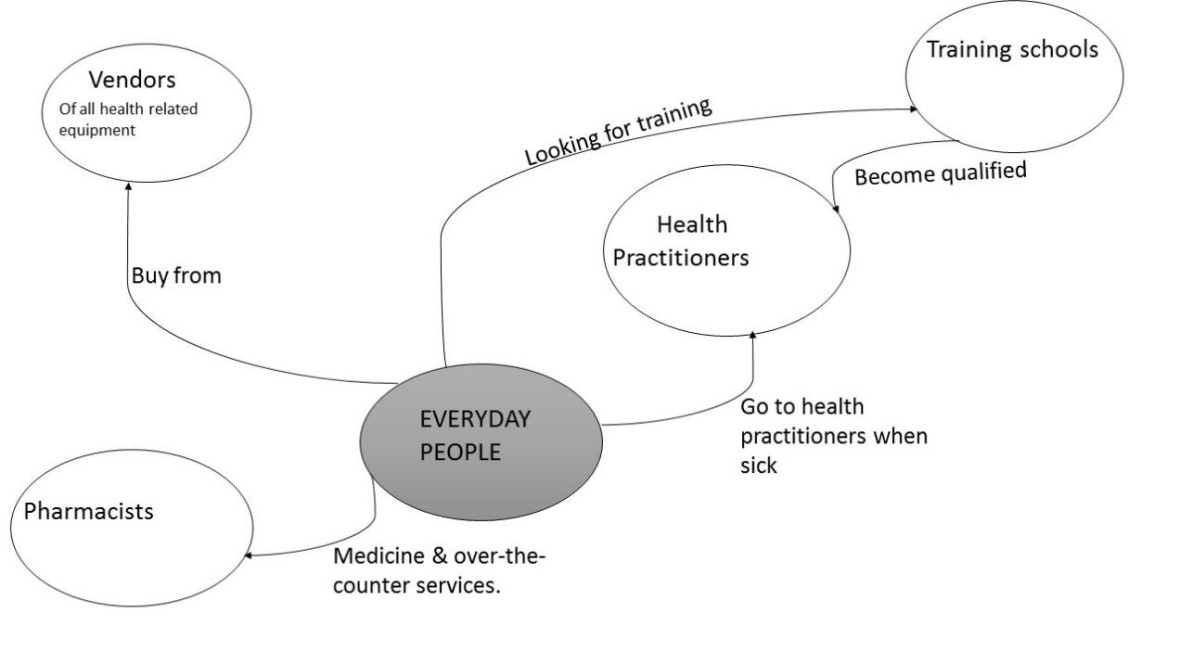 The questionnaires used in the first two phases of the research were designed to illicit responses about problems patients and health practitioners face. The questions were open ended thereby encouraging respondents to give more information. The third phase of research was designed to measure the desirability of the vein finder and the vital kiosk in order to decide on one of the two. The questionnaire for this research contained a list of Microsoft reaction words from which the respondents chose those that best described the products. This was followed by an open ended question on what the design may have failed to capture.

The analysis for all phases of the research was done with card sorting. This applied to the open ended questions which needed to be categorized for further analysis. The same analysis method was also applied to the Microsoft reaction words which was were used in the final phase. The words were categorized into clusters that eased the process of understanding how users perceived the products we presented. For example, it was possible to determine if a respondent thought a product was desirable if the words selected fall under the category “desirable.”

The process of narrowing down on a suitable product was iterative and combined the inputs of the research teams and the major stakeholders of GN Electronics. In the first part of the research, 6 opportunity areas were identified of which GN Electronics chose 3 for further research. One of the major considerations for selecting the opportunity areas was avoiding areas that dealt with emergencies. The reason being that more experience in the health sector would be necessary before working with on technologies for use in life and death situations.

The second phase of the research involved narrowing down on the 3 fields and coming up with two ideas for each field to make a total of 6 ideas. The initial intention at this point was to choose one of the products for further research after which a prototype would be built. However, two of the products were identified to have high potential on the market and were therefore selected for further research and prototyping. The chosen products were the vital kiosk and the vein finder.

The vein finder, as the name suggests, is a device that helps phlebotomists’ locate veins in order to draw blood. This would be applicable in situations where veins are not clearly visible. The vital kiosk, on the other hand, was envisioned as a structure capable of measuring various vital signs, like temperature and heart rate simultaneously. This was meant to speed up the process at the OPD as well as provide a basic means of remote diagnosis for under privileged communities.

After the two products were chosen, members of the electronics club were brought on board to build the first prototypes. After the prototypes were presented to GN Electronics it was decided that the vein finder had more potential on the market considering the data collected from both health practitioners and users. It was evident that the vein finder would solve a basic problem that would improve the experience of patients. Currently, a working prototype of the vein finder has been built by the electronics club in preparation for the final presentation with GN Electronics.