Wow!!! Who says it’s not enticing to be innovative? The Ashesi D: lab has done it again with the vertical farming project. Interning with Start-Up traction in 2017 as a freshman, Nutifafa Amedior, who is currently a second year CS major in Ashesi came across the idea of vertical farming through Carry Go Farms. Seeing them have bumper harvests with a relatively smaller piece of land, Nutifafa got intrigued at the creativity behind it. With the help of the design lab and the farm modelling project, a 5 by 5-meter piece of land was gotten to practicalize this long-term passion Nutifafa had inside of him.

Currently, a team of six are working hard with 500 bottles to grow a 5 by 5-meter land of vegetables with plans of extending it for the benefit of Ghana’s agriculture. One would ask, what at all is the logic behind the vertical farming project? Well, as the name suggests, these vegetables are planted on top of one another with the help of plastic bottles and ropes to serve as support. Painted with black oil paint and coated with white paint as well to retain heat from sunlight. Trying hard to be health conscious, organic fertilizer will be used in this project. Cow dung and coconut husks will serve as a growth medium for the vegetables.

The beauty of vertical farming is that it uses a relatively smaller piece of land. However it leads to higher yield,  prevents fungal infestation, and is cost-effective.

Having some of the team members share their experiences, they admitted that it is quite demanding especially having to wake up as early as 6 am after a tiring school week, combining academics with it, and having to use opportunity cost to weigh when you have farm work and your assignments to contend with. However, the team lead, Nutifafa, stated, “When you commit yourself to something, you have to realize that if you do not do it, no one else will.” He said that he had a very good interest in agriculture because he believes that food is an essential commodity. Another statement he made, which is paraphrased was that vertical farming is a way of producing much more food compared to the normal farming strategies. If this is expanded, Ghana could export food to other countries which would be an immense boost to our economy.

After interacting with the vertical farming team and getting myself dirty, I said to myself, if we have such brains in Ghana, then we have nothing to worry about. We can always find a way to invent. It takes brains to make this happen. Vertical farming is a strategic use of brains to make farming more attractive and lucrative.

PERFORATING BOTTLES THAT WOULD BE USED IN THE FARM PROJECT 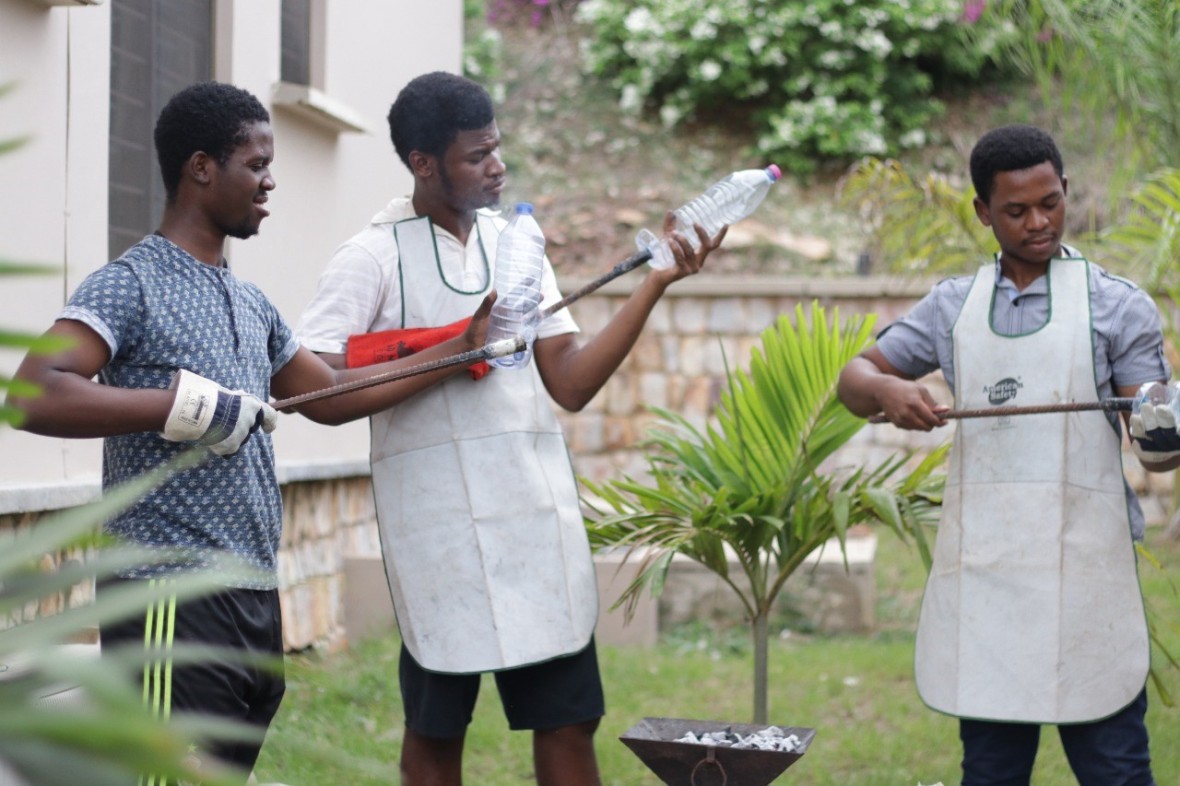